Home » What Is the Difference Between a Pony and a Horse, and Which One Should You Pick?

What Is the Difference Between a Pony and a Horse, and Which One Should You Pick? 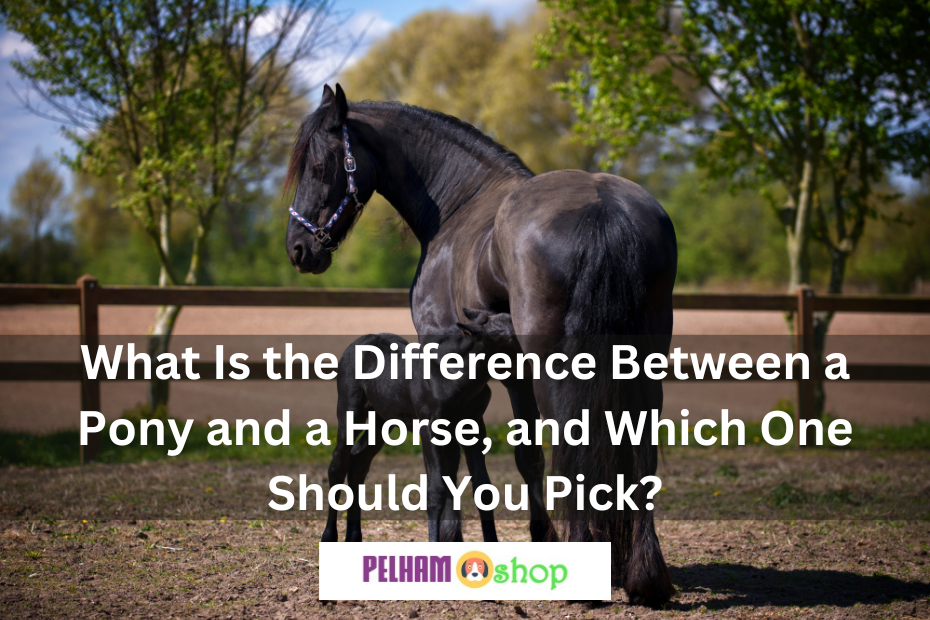 There are a great deal of distinctions between the two. The reality lies somewhere in the middle; it’s not only a matter of their size: horses and ponies do have certain nuances in common with one another, and this applies to more than one aspect. The prospective owner of a horse or pony need to be aware of these things and deliberate carefully about their selection of a companion animal. It has the potential to have an enormous impact on the connection you share with your new equine companion.

To begin, let’s make sure we’re on the same page about the language. The term “pony” is most often associated with a miniature horse. This is not necessarily the case, however, since they might be “toy” horses and ponies who were purposefully bred to be smaller. A horse is considered to be any equine that is at least 4 feet 10 inches tall, which is equivalent to around 150 cm and higher. This definition is generally accepted in the professional world. On the other hand, a pony refers to any breed of horse that is standing at a height that is lower than this. However, height is not necessarily the determining factor for distinguishing the two, since there may be a great number of nuances that differentiate them from one another.

The difference in growth is, of course, the one that stands out the most. Ponies, on the other hand, will not continue to grow in size as they age, unlike horses. Now, be very careful not to confuse a pony with a foal, which is a young horse. The length of the legs is one characteristic that differentiates the two; horses often maintain the same leg length throughout their whole lifetimes. On the other hand, ponies may be stockier and more robust, with shorter bodies and legs that are proportionately shorter than those of horses. Also, their foreheads are larger, so keep an eye out for that telltale sign. As a result of all of these characteristics, nowadays, ponies might be much more powerful and resilient than the refined adult horse. They can also operate for a longer period of time and are more resistant to the cold. As a result of this, throughout history, ponies have been regarded as being reliable and sturdy labour animals.

The mane and the coat are two further distinguishing characteristics that set these two apart from one another. The pony’s mane and coat both seem to be substantially thicker, almost to the point of becoming shaggy. On the other hand, the coat of the horse is often sleek and lustrous, particularly if it has been groomed.

It’s interesting to note that ponies often reach adulthood considerably sooner than horses do. While it may take some horses as long as six or seven years to achieve maturity and their full size, ponies often mature and attain their full size much more rapidly. When deciding between the two options, this is one of the most important distinctions you need to be aware of. Even while this may have an effect on a wide variety of care-related factors, it does not in any way make it simpler to care for and raise ponies.

When we think about training and bonding, which many potential owners will have to undertake in the future, it is essential to keep in mind that ponies have a tendency to be rather headstrong. In point of fact, they are far more obstinate than horses. Although they are sometimes referred to as submissive and “stoic,” ponies are in fact headstrong creatures that are more similar to mules in their doggedness. This may have a negative impact on training and make it more difficult in the long term. However, if you are able to develop a “common language” with your pony as well as a common ground, you will be able to rapidly build a one-of-a-kind and amicable connection that will last for the rest of your life. Accepting at least some of the pony’s obstinacy is obviously required in order to make the trade work, however. A horse could be more docile and ready to work and finish duties, but a pony might be an adept at dodging labour and getting their own way.

When deciding between the two breeds, it is important to take into account the food needs of each. As a result of their smaller stature, ponies often need less food than full-grown horses do. Because of this, the cost of providing for their needs may be reduced. Be wary of the serving sizes you offer them, though, since obstinate ponies often act as if they are starving in order to get more food from their owners. It is important to get familiar with the appropriate serving sizes in order to prevent overfeeding your pony, which may lead to serious health problems. If, on the other hand, you want to feed your pony grass from pasture rather of grain, you may find that it is far simpler to provide for it than a standard horse. On a meadow that may be too sparse and lacking in quality for a horse, a pony may easily satisfy their nutritional requirements.

The last factor to consider is how long someone lives. A pony is the best option to go with if you want to get an equine companion that will remain by your side for the rest of your life. This is due to the fact that they live far longer than horses, with some individuals surviving well into their thirties. This is in contrast to their horse counterparts, whose predicted lifetime is often ten years shorter.