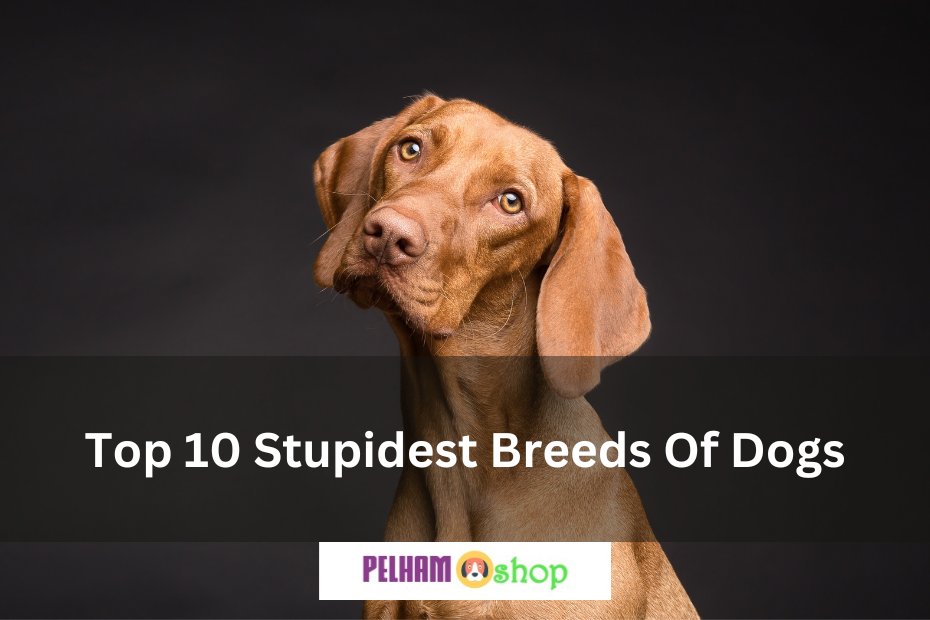 It’s true that not all dogs are geniuses. None of the dogs on this list of the stupidest dog breeds are to be ashamed of, either as individuals or as owners.

Is it OK to refer to any animal as “stupid” today? Let’s dub these group of canines the dimwits! We all know that not every dog (or human) has the potential to score in the 99th percentile of intelligence. While it may be tempting to generalise about a breed’s intelligence, Stanley Coren, a psychologist and author of The Intelligence of Dogs, argues that we should instead consider three distinct aspects of a dog’s brainpower while doing so.

2. The second is adaptive, and it entails his learning to solve problems on his own based on his prior encounters with them. As an example, the cat scratches, and he quits trying to herd it.

3. The third kind of intelligence he has is called “working and obedience intelligence,” and it indicates that he can pick up new skills after being taught them by humans. For instance, he has learned (and follows) to avoid the cat lest he get scratched.

Naturally, it shouldn’t come as a surprise that cognitive studies exist, and like those done on young children, they help decide which canines are intelligent little guys and which are, well, not so much… To find out which breeds are the least intelligent, we need to know how to rank them.

To be truthful, the nose is master over all scent dogs. Since they are so focused on what they are smelling, it is very hard to capture their attention to teach them anything. This youngster is a wonderful addition to the family, but he has a steep learning curve when it comes to basic obedience commands like “sit,” “stay,” and “give paw.”

He doesn’t lack the intelligence to complete the task at hand; he just lacks the motivation to do so. We’ll just assume this defiant dog knows what you’re asking him to do but is still refusing to do it since you’re not deserving of his obedience because he’s too stubborn to accept orders from someone he doesn’t respect. The fact is, it’s not him; he needs a solid strong pack leader he can respect.

Oh, look, here we have another nose-is-it guy who is obstinate to boot. This laid-back dog is notoriously tough to teach since he does whatever he pleases, whenever he pleases. He’ll be a great addition to the family, but you’ll need to be patient since his focus will be on following that smell rather than on you.

The term “little dog syndrome” was coined in part to explain this chubby canine’s huge personality. An aggressive, defiant, disorder-loving type. This free spirit may get a bad name for not following the rules, but he can have any human eating out of the palm of his tiny, well, claw.

This sad dog is far more interested in finding the evil people than in playing fetch, rolling over, or doing tricks for food. This mutt’s schnozzola is always on high alert because it has more than 230 million smell sensors that can track a scent for kilometres. You want him to pick up a new ability now?

This dog is too busy pushing his way to the head of the pack to waste time learning foolish tricks. Yes, this would-be alpha dog is not just stubborn but also ambitious, and he won’t play nice or at all if you aren’t a powerful pack leader that he respects and accepts. This purple-tongued dog has a reputation for being obstinate, but he’s really just picky.

This lovely guy is very neat and tidy, to the point that his catlike attention to detail has led some to say that he is more like a feline than a canine. Thus, it should come as no surprise that he, like a cat, resists the temptation to adopt the people-pleasing manner highly prized by his human peers. It’s possible that he won’t let you coach him if he doesn’t think you’re qualified, and this will give the impression that he’s not very bright. Have you ever implied such a thing about a cat? Not likely!

This gentle giant is only a slow and steady worker. Herding and scent tracking are not skills he will ever excel at, nor will agility or dock diving. What he lacks in street smarts, however, he more than makes up for in dedication and a commitment to ensuring your happiness. Thus, although it is called “lifelong training,” all it actually entails is that you will be reviewing previously taught material over and over and over again.

Do deep seas exist just where there is still water? This dog may not bark, but that doesn’t mean he isn’t constantly processing information. But that’s not the same thing as saying he is. Because he likes to stare out the window rather than be taught and reserves his voice for for the most important occasions, this active little man is branded as not-too-clever.

She is both attractive and intelligent, but she is also a diva who will not be taught unless you treat her gently. It’s true that this dog has been called neurotic and requires a lot of emotional upkeep. When you include in her inherent independence, you get the traditional “dog’s breakfast” of learning styles. Never in a million years would I call myself stupid! To put it simply, there are more pressing concerns.

Guidelines for Educating Your “Not So Smart” Dog

What kind of dog do you have? Do you feel that your dog should have been included but was left off the list? Training your dog is possible even if he isn’t the brightest dog in the neighbourhood. However, you may need to make a few adjustments to your strategy in order to keep your dog motivated and interested in training.

Slow down and be patient. Your dog’s learning curve may be steeper than average, but it’s not impossible. Take your time with his training. Continue running the command at the beginning of each training session even after he seems to have learned it.

When giving your dog a command or a treat, be sure to emphasise the positive reinforcement. If feasible, your order should just be one or two words long. Keep your thoughts and words organised; don’t ramble or change topics mid-workout.

When training, it’s important to get rid of any potential interruptions. Moving to a quieter room, isolating your dog from other dogs, and putting away toys are all good ways to be ready for training. Quite a few of the canines here are easily sidetracked, so it’s important to give oneself the best chance of success.

Trainings should be brief and to the point. Both you and your dog will experience frustration if you attempt to force the issue for too long. Not even you will benefit from it. If your dog seems disinterested in training, it’s best to stop for the day and try again later.

Is your dog one of the more active breeds? If so, you should tyre your dog out with some physical activity before asking for focused attention. Pre-work activities might be as easy as taking a stroll or playing a game of fetch with your dog.
Having the appropriate incentive may make a huge impact. A dog that isn’t interested in training won’t respond well to a reward that has no discernible flavour or aroma. Choose something he really enjoys, or just give him bite-sized portions of cooked chicken or turkey. You can motivate even the most obstinate dog to cooperate by raising the value of the goodies you provide.

Ask for assistance without feeling awkward. No reputable pet specialist or trainer will judge you negatively because you can’t handle everything at home. Consult a local reward-based dog trainer to discover effective methods of communicating with and encouraging your pet.

Accept your dog for who he is, flaws and all, and provide him unconditional love. Though he may never be the class leader or the agility competition champion, with some time, effort, and patience, your dog may learn the basics of obedience.